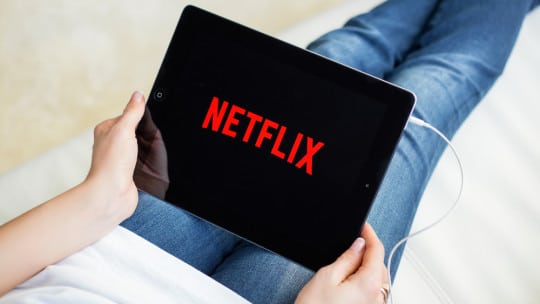 As of early afternoon, shares were off 7% to $381.50. In the end, Netflix closed down 6%, with a potential trade war with China and a sports deal between Discovery and ProSiebenSat.1 joining the Friedland firing to depress Netflix shares.

Up 100% during 2018, Netflix shares ended Friday (June 22) up some 5%, trading at better than $411, a high. The stock was buffeted last week when an analyst at GBH Insights raised his opinion of the video streaming company’s business, estimating its future share price at $400-$500.

A Difficult Day in Hollywood...

Further complicating the story, Netflix over the weekend unveiled a commercial during the BET Awards celebrating 47 black actors and writers who’d worked with Netflix over the years, including filmmaker Spike Lee and actors Alfre Woodard and Laverne Cox.

Scheduled well in advance to debut last weekend, the ad, “A Great Day in Hollywood,” pays homage to a classic jazz photo known as “A Great Day in Harlem,” photographer Art Kane’s shot of top jazz musicians on the steps of a Harlem brownstone in August 1958. That photo includes greats such as Dizzy Gillespie, Count Basie, Thelonious Monk, Charles Mingus, Gene Krupa and Gerry Mulligan.

In the wake of the Friedland firing Netflix debated going ahead with the ad late Friday, but eventually decided to do so, according to The Hollywood Reporter. Strong Black Lead, a group of black Netflix executives, created the spot.

The surprise surrounding the Netflix incident is Friedland’s position. As we noted above, a mere communicator he was not, but the company’s chief communicator.

Neither was he a rookie at Netflix. He joined in 2011 after a stint as a communicator at Disney. He became VP, global corporate communications and was promoted in 2012, per The Hollywood Reporter, which broke the story about Friedland’s firing. Friedland headed media and content publicity for Netflix originals, films and specials in 190 countries.

...Not a Good Day for Communicators

When a brand makes a choice that appears to be insensitive or tone deaf to cultural norms, the question communicators ask often is: "Was a PR pro present when that decision was made?"

As Page, formerly The Arthur W. Page Society, has argued, it's one of the jobs of the chief communicator to act as the brand's external agent, monitoring the conversation on social and in traditional media to make certain the brand's reputation is protected and enlarged. In a sense, the CCO is the brand's last line of defense, overseeing what the brand releases into the external conversation and monitoring what is said about the brand outside the corporate walls. In the Netflix case, though, the CCO was the person who made the insensitive remarks. Twice.

The question that must be asked is whether or not this was an isolated case of an individual’s poor judgment or is this the tip of the iceberg and corporate America uses the N-word regularly?

Friedland seemed contrite in a statement he sent after being fired to The Hollywood Reporter:

I'm leaving Netflix after seven years. Leaders have to be beyond reproach in the example we set and unfortunately I fell short of that standard when I was insensitive in speaking to my team about words that offend in comedy. I feel awful about the distress this lapse caused to people at a company I love and where I want everyone to feel included and appreciated. I feel honored to have built a brilliant and diverse global team and to have been part of this collective adventure in building the world's leading entertainment service.

Netflix chief Reed Hastings released a memo to staff about the firing late Friday. The Hollywood Reporter acquired a copy. It read in part:

I've made a decision to let go of Jonathan Friedland. Jonathan contributed greatly in many areas, but his descriptive use of the N-word on at least two occasions at work showed unacceptably low racial awareness and sensitivity, and is not in line with our values as a company.