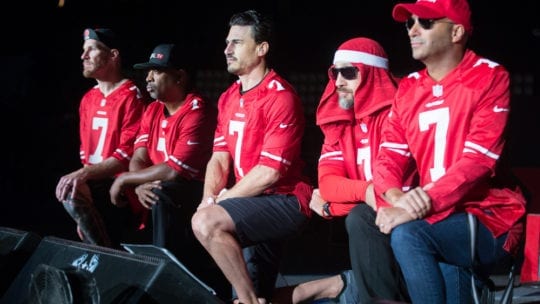 Veteran PR professional Arthur Solomon contributes to this space often. His articles urge communicators to follow political news and political talk shows as a way of getting a relatively low-cost, continuing education in PR and communications.

We agree. This week, though, “My cup runneth over.” There are myriad teachable moments beyond the political arena. A few examples:

Earlier this week something unprecedented occurred. Members of the NFL Players Association were invited to a meeting of NFL team owners. The topic was social justice and how the league will address it. The owners did not change their position; they still prefer players to stand during the anthem, but they will not force them to do so. On the other hand, the meeting was somewhat of a love fest. NFL Commissioner Roger Goodell and the owners acknowledged players’ right to kneel and protest in a respectful way.

The meeting was a result of the furor over currently unemployed NFL player Colin Kaepernick. He knelt last season during the national anthem. He did so partly to bring awareness to racial injustice, particularly regarding the criminal justice system. This season, players and some owners have linked arms during the anthem.

Another unprecedented event: Goodell and a player, Doug Baldwin of the Seattle Seahawks, teamed on an issue of social justice. The two co-wrote a letter this week to congressional leaders offering support to the Sentencing Reform and Corrections Act of 2017. The law,  if approved, would reduce minimum sentences for nonviolent drug offenders.

Delineating a goal or goals is the first step in a PR campaign. Kaepernick’s initial goal was to raise awareness. He’s accomplished that and more. Consider how he’s moved the NFL to address social questions.

Of course, the goal is difficult to find since kneeling, a tactic, gained national prominence. Some of the obfuscation of the goal is due in part to President Trump’s denunciation of the league and players who kneeled. Earlier this week, reacting to the owners’ meeting, the president whacked the league again. At times the kneeling and the displays of solidarity were in protest against the president's claim that the players lacked the right to make their views known and should be fired.

Getting back to the initial goal, though, the PR question is where the NFL and Kaepernick take their social justice campaign now. Their movement needs new goals.

Certainly this sordid situation contains a bevy of PR lessons, starting with the Weinstein Company’s initial, unprepared response to the October 5 reports in the New York Times and the New Yorker. Then there was its board’s incredible claim that it knew nothing about Weinstein’s perverse proclivities. [A subsequent report in the New York Times indicates Weinstein's contract included a clause excusing sexual escapades. Did the board not read Weinstein's contract?] Meanwhile, more actors are coming forward to describe Hollywood sexual abuse, from Weinstein and others.

Earlier in the week our subscription weekly, PR News, asked Deb Gabor, CEO of Sol Marketing, how communicators should handle such situations. Her response is a veritable checklist of PR lessons: “This is an example in which the classic practices for crisis management and communication still hold true. First, above all, acknowledge the victims. Don't make excuses or try to cover up something that someone at the company did wrong. Apologize. Help victims, all of them. Go out with a statement quickly before the story takes on a life of its own. Take responsibility. Accept accountability. Give the world a plan for how you plan to prevent a similar disaster from occurring in the future. Communicate with authenticity, clarity and openness with everyone in your ecosystem. Convey a vision for what the world looks like when you've solved this problem. Be truthful.”

The lesson from Zuckerberg’s initial remarks need little explanation: In most cases, CEOs of prominent brands should avoid speaking about serious issues from a knee-jerk position.

Second lesson, it makes for better PR when a bold proposal includes details. Trying to be transparent, Sandberg said Facebook should release the ads, but failed to say if and when it would do so.

In a similar fit of transparency-itis, Nielsen, the iconic ratings company, said Wednesday it has a way to measure how many eyeballs Netflix is attracting with its original programming. Unfortunately, it refused to offer a detailed explanation of its measurement technique. Then again, a lack of transparency has been the norm. Netflix says the number of people watching its shows matters little, since it sells no advertising. Nielsen's numbers about Netflix viewership are "not even close," Netflix claims.