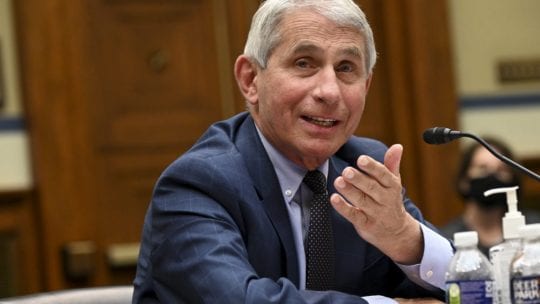 "I think people are misinterpreting [the CDC guidance], thinking that this is a removal of a mask mandate for everyone. It's not," Fauci tells Mike Allen of Axios.

What the CDC means, Fauci says, is that vaccinated Americans can feel safe both indoors and out without wearing masks.

Instead, Fauci says, Americans are thinking "'You don't need the mask anymore.' That's not what the CDC said.” What it said, Fauci says, was: “If you are vaccinated, you can feel safe…It did not explicitly say that unvaccinated people should abandon their masks."

On the other hand, the latest CDC guidance was a walk-back from an earlier one. It’s also clear communication about coronavirus has confused Americans for a long time.

Years from now, it seems inevitable some historians and college professors will devote pages and lectures to how communication, at some level, was at the center of the country’s pandemic experience.

Before diving into the American experience, historians may begin their books and articles looking at China. They may recount how Beijing ordered provincial authorities to silence a young doctor. In a December 2019 chat on social media with medical school friends, the ophthalmologist spoke of an unknown sickness he’d seen in patients during rounds at a Wuhan hospital.

Another example of stalled communication: Late in 2019, then-CDC director Dr. Robert Redfield heard reports of an unknown virus in China. His calls to Chinese contacts yielded nothing. They ducked his calls or responded to questions with forced silence.

In addition, Redfield, offered Beijing a US team to help treat the virus. China's answer was 'No.'

Fortunately, western journalists based in China wrote about the virus. It wasn’t easy. Whacking at communication again, Beijing expelled a group of western reporters in March 2020. This was several weeks after WHO declared the virus a pandemic.

After dealing with China’s mostly successful attempts to ‘stop the spread’ of virus communication, historians and professors likely will write about how US communicators were preparing for the pandemic.

At that time, late in February and March 2020, internal corporate communicators were urged to direct staff to trusted medical sources, such as the CDC or WHO. This advice assumed the scientific community was a monolith. It would speak with a single voice, spouting clear, concise, consistent messages.

As we know, the situation became far more complex.  The country’s medical system in 2020 bears some responsibility. It was a pastiche of local, regional, state and federal authorities. Nearly all had their way of doing things, historians will write, including communicating. The result was an array of messages…and confusion.

College professors teaching PR may devote several lectures to the state of consumer confusion over what, from an historical perspective, likely will seem basic messages: wear a mask, wash your hands, avoid indoor gatherings and keep a six-foot distance from others.

A Question of Trust

Moreover, many historians will include how the trusted CDC lost its cred in the eyes of some. That tends to happen when contradicting messages battle in the public square, and when politics allegedly attempts to overturn science.

And speaking of politics, pity the professors who will attempt to cover how it bled into communication during the pandemic. How each day for months, the former president briefed media with positive news about testing, personal protective equipment and ventilators. “We’re doing a fantastic job,” the country will reopen soon, he’d say repeatedly.

Yet the television networks–years from now historians might have to explain what a television was–and social media were loaded with contradictory content. Doctors, nurses and patients testifying that hospitals were overloaded, equipment and medicine scarce. Want a test? How long can you wait? How much money do you have? The books and lectures may mention some medical personnel lost their jobs when they communicated.

Creative teachers might ask students to role play. One student plays a chief communicator in a hospital. COVID-19 has overrun the hospital, its staff and equipment. The hospital’s CEO demands that this information remain within the building’s four walls.  A second student plays a healthcare staffer who wants media to hear the truth. Ready, go.

It may not be easy to explain to students why the president, who, essentially, was the country’s chief communicator, urged citizens to wear masks, but admitted he wouldn’t. Later, he wore a mask sporadically. Easier is explaining how confused people were about mask wearing and distancing.

Years from now perhaps teachers will frame their lectures with the idea that a person’s pandemic experience depended on where she lived, her income, politics and skin color.

One of the takeaways for today’s PR pros is that confusion about coronavirus communication is not the public’s "fault," Fauci says.

"People either read [coronavirus messages] quickly, or listen and hear half of it,” he tells Allen.

Remove the word ‘coronavirus’ in the previous sentence and it becomes good insight for communicators in all sectors. People are busy. They’re ingesting messages quickly. Clarity is paramount. So, are bullet points reiterating your message, easy-to-find additional information and FAQs. Good communicators clear up confusion, not add to it.