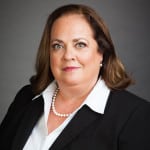 Pamela Greenwalt has been a pivotal leader guiding SAG-AFTRA through a revolutionary period of media and entertainment. Her vision for the organization and its place in the industry, combined with her media strategy surrounding crucial negotiations, has reaped tangible benefits for the 160,000 actors and media professionals SAG-AFTRA represents.

With more than three decades of national and international PR experience, and 10 years with the union, Greenwalt connects with others, inspires change and empowers those around her. A strong proponent of collaboration, she has brought together a team of creatives who shine under her leadership.

Since its announcement at the White House in March 2015, Greenwalt has enlisted SAG-AFTRA members and partners to volunteer 1 million mentor hours through A Call to Arts. Greenwalt is leading a team of entertainment professionals who are inspiring the next generation of storytellers by mentoring disadvantaged youth. This collaboration enlists the arts community to nurture creativity in mentees—inclusive of SAG-AFTRA members, pre-members and students ranging from elementary through college.

Greenwalt’s collaborative approach has brought in dozens of partner organizations, including New York Women in Film & Television and the Alliance for Women in Media. Most recently, she has initiated an internship program and partnership with Academy Award-nominated writer/director David O. Russell’s Ghetto Film School. As part of this effort, Greenwalt organized a sponsorship of The Hollywood Reporter’s Women in Entertainment to provide a wardrobe allowance, backpacks and school supplies to the program’s underprivileged mentees.