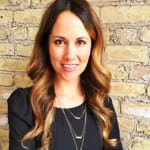 Claire Tindall has been described as “kind, effective and strategic” and her PR strategy took the Boulder-based robotics company, Sphero, from relatively unknown niche startup to the leaders in the connected play category.

In the fall of 2015, Sphero launched BB-8 by Sphero, an app-enabled droid, in conjunction with the upcoming film Star Wars: The Force Awakens. Tindall created and led a world-wide PR strategy to execute a perfect product launch which included: tedious planning with the Disney and Lucasfilm teams, directing a global strategy under strict embargo, organizing a national media tour to align with embargo and Force Friday announcements.

Tindall led a team of nine PR agencies, located across three continents in the highly anticipated launch under a strict embargo. Part of the planning meant coordinating logistics with Disney and Lucasfilm to orchestrate the launch of the embargoed product across all time zones. Tindall devised an embargoed deskside strategy with top tier media to showcase the complex attributes behind the product to ensure coverage on launch day was in-depth. The product was finally revealed on Force Friday in September on Good Morning America. Thirteen minutes into it being available on Amazon, BB-8 by Sphero was sold out.

On launch day Forbes named it “the best Star Wars toy ever," the droid appeared on the Today show twice in 24 hours, as well as Fast Company, Bloomberg, Forbes, Fortune, Vanity Fair, Mashable and The Verge. Impressions within the first two months of launch surpassed 80 million. BB-8 by Sphero then went on to be named the 2015 #1 Selling U.S. Toy by The NDP Group, and 2016 Best of Toy Fair by Popular Science.