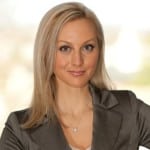 As the global head of communications for S&P Global Market Intelligence, Christina Twomey has accepted the challenges associated with elevating, protecting, and preserving a powerful brand in the media. Through her tenacity, she has quickly ascended to senior level leadership at Market Intelligence. Through measurable results, she has driven the business to newfound success in the press.

Twomey has worked closely with S&P Global Market Intelligence's president Mike Chinn in the past year to strategically place him in the media as a thought leader in the field of data science. As a result of her strategic communications work, Chinn, who had remained relatively behind the scenes from a media perspective until recently, secured a coveted speaking role at the 2016 Capital Markets Summit-Finance Flash Forward event at the U.S. Chamber of Commerce, speaking on the topic of innovations in data science.

Twomey then followed up that event with placing an op-ed for Chinn in Institutional Investor entitled, "Wall Street 2026: less terminator, more iron man," which led to another high-profile corporate speaking engagement on the same topic. As a culmination of Twomey’s strategy, she was able to successfully pitch and place Chinn on Institutional Investor's Tech 50 for 2016, marking his debut to the industry who's who. Besides her work with positioning Chinn, Twomey also works closely with various other leaders from her company and routinely garners high profile placements in the media for its spokespeople, such as Wall Street gurus Sam Stovall and Mike Thompson.