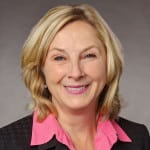 Norris-Smith leads a team that has received more than 60 regional and national awards, including a prestigious Silver Anvil from the Public Relations Society of America.

Norris-Smith planned and produced a highly successful public relations campaign to announce that PHCS and the University of Pennsylvania Health System (Penn Medicine) had signed a Letter of Intent to pursue a partnership. The campaign utilized traditional and social media and in-person events to reach internal and external audiences to promote awareness, address questions and encourage full transparency of a major new strategic direction at a time of historic change for the organization.